Good start for Vietnam Economy in 2019

[8 April 2019] — Việt Nam’s economic growth was impressive in the first quarter of this year in the context of a global slowdown, Nguyễn Bích Lâm, General Director of the General Statistics Office (GSO) of Việt Nam said at a press conference held by the Office.

Stable growth was seen in agro-forestry-aquaculture; industry and construction; and service sectors, with respective increases of 2.68 per cent, 8.63 per cent and 6.5 per cent. Notably, the industrial sector climbed 8.95 per cent compared to the same period last year. Processing and manufacturing was the pillar of the growth, scaling up 12.35 per cent.

Lâm said that this was an impressive result for Việt Nam which now had a high rate of economic openness, in the context of a global slowdown and declining global trade. 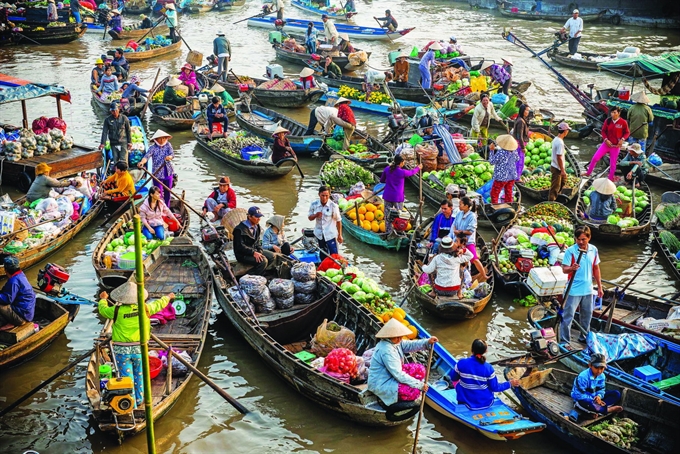 The International Monetary Fund (IMF) in January revised down its estimates for global growth to 3.5 per cent for 2019 and 3.6 per cent for 2020, 0.2 and 0.1 percentage points below its last forecasts in October. The World Bank also forecast the growth of the global economy would slow to 2.9 per cent in 2019, compared with three per cent in 2018.

The country’s consumer price index (CPI) rose 2.63 per cent in the first quarter of 2019, the lowest rate in the past three years.

GSO said that low inflation in the quarter was attributed to a fall in consumption demand regularly occurring after Tết (Lunar New Year) holidays (which fell at the start of February) coupled with the impact of African swine fever.

In March, CPI dropped by 0.21 per cent over the previous month.

Fuel prices dropped by 8.22 per cent on average during the quarter, which contributed to lowering overall CPI by 0.35 per cent.

The electricity price hike of 8.36 per cent, starting from March 20, did not have an impact on inflation in the quarter, Lâm said.

Core inflation (excluding food, energy, and State-managed services such as healthcare and education) rose 1.83 per cent in the quarter.

Đỗ Thị Ngọc, Head of GSO’s Price Statistics Department, said that the prices of State-management services should be adjusted at reasonable intervals to keep inflation under control.

“Economic growth is robust, the macro-economy remains stable and inflation is kept under control,” Lâm said, adding that he was optimistic about socio-economic development in the coming quarters. "The rate of unemployment has decreased, the economy’s production capacity is expanded, creating momentum for economic development."

With an improved investment climate, Việt Nam also saw a record number of new firms in the first quarter.

A GSO survey on manufacturing and processing companies revealed 54.6 per cent said that they forecast better business and production in the second quarter of this year, 34.8 per cent saw stable business while only 10.6 per cent anticipated more difficulty.

GSO proposed more efforts in improving the business climate to create conditions for businesses and promote the development of the private sector.