[2 May 2018] — Small- and medium-sized enterprises (SMEs) have been highly conducive to economic development in Việt Nam as they significantly contribute to job creation, export promotion, growth generation and poverty reduction. However, despite accounting for some 98 per cent of the country’s enterprises, SMEs’ performance is still constrained by many factors, including both “internal capacity” and “unfriendly external factors”, such as shortage of qualified human resources and little access to technology, besides administrative red-tapism.

Among the detrimental external factors, lack of credit accessibility is seen as the major obstacle to the sustainable development of SMEs. Therefore, one of the most important measures to support SMEs is to improve their access to credit. In an economy like Việt Nam whose financial system relies heavily on banks, access to credit is even more critical. In fact, Việt Nam has made great efforts in this regard, and its achievements are recognised by international institutions. Commercial banks are now more interested in supporting SMEs not only because of their image but also their increasing awareness that SMEs are important partners who can help improve their business performance on the basis of “win-win”. The share of loans to SMEs has increased significantly in many commercial banks. 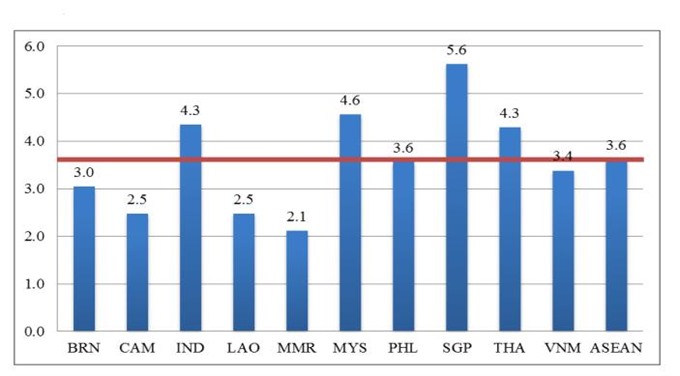 According to World Bank’s “Doing Business 2018” report, Việt Nam’s Access to Credit Index in 2018 ranked 29 out of 190 economies surveyed, gaining 75 points on a scale of 100. In terms of both score and ranking, Việt Nam’s Index was well above the average of OECD (Organisation for Economic Cooperation and Development) and East Asia-Pacific countries.Compared to the 2017 report, the index in 2018 has risen by five points, ranking up by three levels, and is the second-highest index of 10 indicators in Việt Nam. Together with five other high-ranking indexes, the Getting Credit Index has helped lift Việt Nam’s position in terms of business environment by 14 levels compared to 2017, standing at 68 out of 190 countries.

World Bank attributed the positive changes to the country’s legal framework regarding the expansion of collateral assets and the completion of the credit information system from 2008 to 2017. Specifically, the Civil Law 2015, which came into effect on January 1, 2017, has expanded the scope of assets to be used as mortgages, which helps improve access to credit and facilitate businesses and investors.

It is noteworthy that Việt Nam has also reached the target set for the Credit Accessibility Indicator in the plan of banking sector actions contributing to improving the business environment and enhancing national competitiveness and enterprise development in 2016-2017, with a vision to 2020.

The achievements of the country in credit accession (as well as the business environment ranking in general) are positive and praiseworthy. However, looking deeper, there is still a lot of anxiety and concerns related to policy issues and policy enforcement.

First, the score of Access to Credit is 75, still far from the standard of 100. Meanwhile, some sub-indicators still lag behind other economies with good practices and standards (as in the case of Malaysia), especially for the coverage of credit information.

The Credit Bureau Coverage sub-index (number of individuals and firms listed in a credit registry as percentage of the adult population) reached only 19.7 per cent, which is lower than the average level of OECD and East Asia-Pacific countries and much lower than that of many Southeast Asian countries.

Second, the World Bank report uses four indicators that measure two types of institutions and systems to facilitate access to finance and improve financial allocation: (i) The legal rights of borrowers and lenders in secured transactions and bankruptcy laws; and (ii) Coverage, scope and quality of credit information obtained through credit registries and bureaus.

The indicators are quite basic, but it may not be enough when looking at the “inherent” barriers to getting credit in Việt Nam. A study by the Central Institute of Economic Managenement and Vietcombank in 2006 pointed out many obstacles for SMEs in accessing bank credit, including lack of collateral, low accounting standards, high cost of information collection and administration procedures, and unfeasible business investment projects. In addition to this, credit ratings and guarantee frameworks are also significant for access to credit by SMEs.

A research by Trần Thọ Đạt and Tô Trung Thành from the National Economics University published this year shows that the biggest cause for businesses to be rejected by commercial banks or to receive only a part of the loan requested is unqualified collateral. Collaterals required in loan application are mostly land and house (38.5 per cent) and machinery (26.5 per cent). Unofficial costs and discrimination between SMEs and large enterprises as well as between private and State-owned enterprises are still detrimental factors.

Third, reducing barriers is necessary but not sufficient. Việt Nam needs to diversify its financial market and establish SME credit facilitating systems to reduce the supply-demand gap in SME finance.

According to a report of the Economic Research Institute for ASEAN and East Asia in 2015, when considering the ASEAN SME Development Policy Index, in terms of both the soundness and diversity of the financial market and factors similar to World Bank’s Credit Accession Index, Việt Nam has average scores in ASEAN (Figure 1). Thus, there is still room for the country to catch up with other economies.

A working paper on the development characteristics of the Vietnamese SME sector in 2017 by Nguyễn Đức Thành and Phạm Thị Tuyết Trinh from the Việt Nam Institute for Economic and Policy Research highlights some experiences of South Korea and Taiwan.

The Korean government has provided direct (venture capital market) and indirect financing support (credit guarantee services) to ensure the development of innovative SMEs. Based on the evaluation of the level of technology used by SMEs as well as its commercialisation and marketability, the credit guarantee funds will offer financial assistance.

In Taiwan, the SME Troubleshooting Centre, in coordination with the Credit Guarantee Fund, was established in 1974 with the main functions of being an intermediary agency, eliminating obstacles that SMEs had previously encountered due to lack of collateral as well as increasing the willingness of financial institutions to grant loans to SMEs. The Joint Guidance Centre was also set up to provide financial diagnostic services, thereby making full use of a comprehensive financing function that incorporated financing, guarantees and guidance to help many SMEs secure loans (dual-track financing system).

The above issues imply that a much broader approach is needed to make credit accessible to SMEs rather than relying only on World Bank’s Access to Credit Index, though that indicator is intrinsic and meaningful. It is necessary to have on board government, enterprises, commercial banks and other financial institutions as well as business associations.

A dynamic, competitive and innovative private sector, in which SMEs account for a large part, is a solid guarantee of Việt Nam’s prosperity and development. — VNS