Stronger domestic demand, robust export-oriented manufacturing and a gradual recovery of the agricultural sector are driving Việt Nam’s economy, which expanded by 6.4 per cent during the first nine months of the year, the report said. 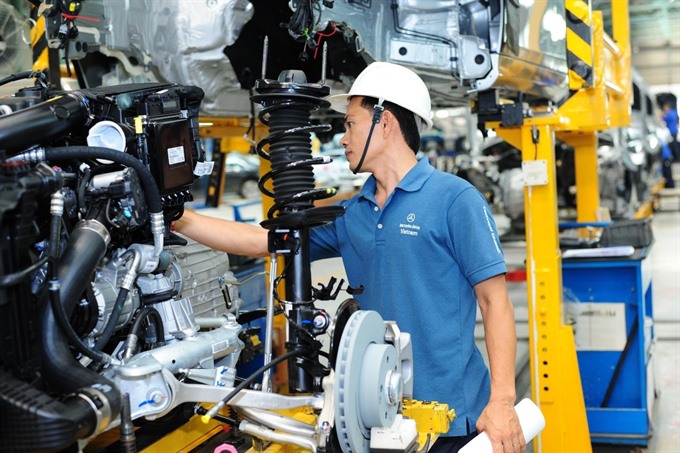 The manufacturing and services sector respectively grew by 12.8 per cent and 7.3 per cent during the same period, it added.

Job growth continued, with 1.6 million new jobs added in the manufacturing sector over the past three years and 700,000 additional jobs in the construction, retail, and hospitality sectors, leading to higher aggregate labour productivity.

Labour demand also contributed to rapid wage growth, with wages increasing by 15 per cent cumulatively between 2014 and 2016.

Despite progress in resolving non-performing loans, financial risks remain. These include the lack of robust capital buffers in some banks, especially amidst rapid credit growth, the report said.

Fiscal tightening is under way, the report highlighted, and has led to a leaner budget deficit and containment of public debt.

However, the decline in public investment – falling to 16 per cent of total spending in the first nine months of 2017 compared with an average of 25 per cent in recent years – may be unsustainable over time, as Việt Nam needs significant investments in infrastructure to support future growth.

A slow-down in structural reforms could also impact the ongoing recovery, especially given the weaker growth in investment. Enhancing macroeconomic resilience and undertaking structural reforms can lift Việt Nam’s growth potential over the medium term.

A special section of Taking Stock focused on improving efficiency and equity of public spending. With public debt close to the statutory limit of 65 per cent of GDP, Việt Nam’s government faces tight budget constraints for several years to come.

In the short run, the country should focus on quality and sustainability of growth, instead of merely the pace of growth. It should also insist on sustainable, growth-friendly fiscal consolidation, responsive monetary and exchange rate policies, addressing non-performing loans, raising capital buffers and managing credit growth.