[2 March 2013] - “Innovative financing for building community resilience to climate change in coastal Vietnam” is one project of SNV (Netherlands Development Organization) Vietnam and is funded by the Federal Ministry for the Environment, Nature Conservation and Nuclear Safety (BMU) of Germany. The project is a contribution to a national effort to respond to climate change by supporting vulnerable communities to effectively reduce potential climate risks through various means and approaches. The project is implemented in five communes of Nghi Loc District, Nghe An Province, Vietnam (Nghi Cong Nam, Nghi Lam, Nghi Thai, Nghi Van, and Nghi Yen), from January 2011 to January 2014. 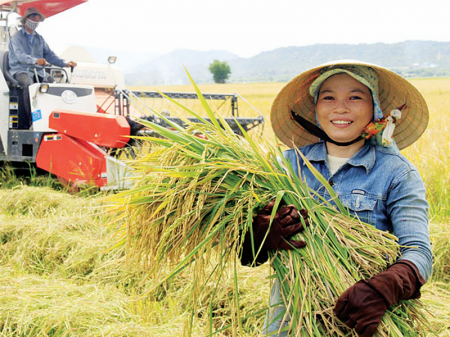 The overall goal of the project is to reduce poverty by increasing the adaptive capacity of local communities to the effects of climate change via four main components: (i) Capacity building on Climate change, (ii) Improving resilience for agriculture livelihoods, (iii) Promoting PES and forest management, and (iv) Weather risk insurance scheme (Agricultural Community-Based Rice Crop Insurance) development and application.

As a local partner of Micro Insurance Academy (MIA), India and contracted by SNV Vietnam, Economica Vietnam has provided various supports, contributed technical advices, and participated in the implementation of the fourth component - the Area-yield Community-Based Rice Crop Insurance pilot for the winter-spring 2012 - 2013 season. The component is better known as Pilot Agriculture Community Based Insurance Project in Nghe An (Agri CBI Project). The pilot is implemented in 81 villages of 5 communes in Nghi Loc District of Nghe An Province, Vietnam. The benefits for farmers participating in the pilot will include compensation if the actual rice yield of certain village falls below the average yield of the last three crop seasons of that village. Additionally, farmers will also be compensated for damages occur during sowing period.

With the guidance and management of SNV Office in Hanoi and the cooperation of local partners on the field, different activities and approaches have been carried out by MIA and Economica Vietnam’s experts, including: established working relationship with Vietnamese partners (national, provincial, district and commune authorities, insurance companies…) for the purpose of the study and for further inventions; conducted detailed analysis of the agricultural micro-insurance and financial sector of Vietnam and the demand of the local residents; organized technical workshops to present the component’s concept, develop and introduce the product with local authorities, insurance companies and implementation partners. The two institutions have also conducted training sessions on the Agri CBI pilot and product, awareness campaign, and claiming process for the ground structure (implementation partners – commune level government, village heads) and cooperated with the ground structure to conduct awareness raising and enrollment meetings for 81 villages in 5 project communes.

In the coming months, Economica Vietnam will continue to work closely with MIA to support the project to achieve the objectives of the project.